Live at the BBC Pie Chart 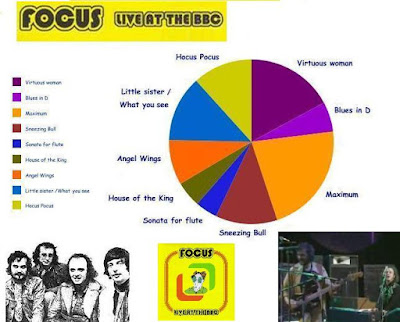 Chart showing the proportion of the album taken up by each track
No comments: At the Rainbow Pie Chart This chart shows the proportion of the album taken up by each track
No comments:

In and Out of Pie Chart This chart shows the proportion of the album taken up by each track
No comments:

Labels: In and out of Focus, Pie chart

Use of vocals Graph 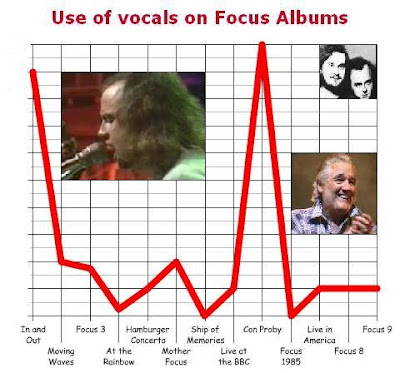 Archive number: 67
Title: Little Sister/What you see (Live)
Main Album: Live at the BBC
Track number: 8
Genre: Live Cabaret Jazz Vocal/Live Jazz Funk Instrumental
Venue: New Victoria Theatre, 17 Wilton Road, London SW1V 1LL (now Apollo Victoria)
Length: 08' 18”
Composer: Thijs Van Leer/Roselie Peters
Musicians: Philip Catherine - Electric guitars; Thijs Van Leer – Electric piano, Mellotron, Vocal, Voice; Bert Ruiter – Bass; David Kemper – Drums
Producer: BBC
Engineer: BBC
Label: Hux Records
Date of recording/release: Recorded March 21 1976 but only released (on CD) June 1 2004
Alternative versions: This track first appeared on Van Leer's solo album O my love!
Notes: The quiet, wistful and undemanding vocal track is segued with the up tempo jazz funk instrumental. The vocal track is bounded by an introduction (00:00-01:04) and conclusion (03:11-03:36) the highly laid back vocal section taking up the rest of the time (1:05-03:10). The intro is very quiet, with keyboards and guitar only. After a brief silence (01:00-01:02) the high hat takes us into the slow and sparse band-backed vocal. The minimalist words are
I'll carry you, I'll carry you
Out into the land,
Go before dusk
My tears are made of diamond,
They are yours
Little sister, do you know?
I have seen into the sky,
Oh how, how I am moved!
We end (03:11-03:36) with an atmospheric signing off on keyboards and guitar before the rumbling thunder of the following track begins. The bass and drums lead the build up on this next track (03:37-04:28). After a few funky false starts the guitar then takes up the lead as the band continue the funk backing (04:29-05:25). Next Van Leer, almost comically, uses his uncanny voice to take things on (05:27-05:53) breaking down briefly to give space to the piano (05:54-06:01) but taking things up again briefly (06:02-00:20). Finally Catherine's guitar comes in again to give a jazzy lead that suddenly crashes (06:43-06:47) and we have a reprise of Little Sister (using the second part) as the coda, dying out with the sound that introduced the second track (06:48-07:50). We then have half a minute of audience applause and a 'thank you very much' from Van Leer yet again (07:51-08:18). During this time the band presumably leave the stage then quickly return for the encore.
No comments:

Archive number: 66
Title: Angel wings (Live)
Main Album: Live at the BBC
Track number: 7
Genre: Live Jazz Rock Instrumental
Venue: New Victoria Theatre, 17 Wilton Road, London SW1V 1LL (now Apollo Victoria)
Length: 05' 38”
Composer: Philip Catherine
Musicians: Philip Catherine - Electric guitars; Thijs Van Leer – Electric piano Bert Ruiter – Bass; David Kemper – Drums
Producer: BBC
Engineer: BBC
Label: Hux Records
Date of recording/release: Recorded March 21 1976 but only released (on CD) June 1 2004
Alternative versions: This track first appeared on Catherine's effort with Jasper Van't Hof and Charlie Mariano Transitory by Pork Pie. An acoustic version can be found on his Moods Vol 1. A live Focus version appears on a later greatest hits album.
Notes: All begin together (00:00-00:07) except the drums, which come in a little later, as a melodic atmosphere of mystery is created. This is very much Catherine's track. He breaks in with his guitar to take up the lead at 00:48 and we are then treated to a feast of jazz rock guitar mastery (00:49-05:32) as he rings the changes on his own composition, ably backed by the band. Applause follows (05:33-05:38).
No comments:

Labels: 1976, 66, Angel Wings, Catherine, Instrumental, Jazz Rock Instrumental, Live, Live at the BBC, New Victoria Theatre
Newer Posts Older Posts Home
Subscribe to: Posts (Atom)
Focus is the best of all bands
They are based in the Netherlands
Their mainstay is called Thijs van Leer
They play their music far and near
They play mostly instrumental
Sometimes rowdy, sometimes gentle.