It was good to be at the 100 Club on Oxford Street in London reccently to hear Focus in fine fettle on the day they released their new album - Focus 11. We didn't hear any tracks from the new album, although for the very first time they played Song for Eva as found on the previous Focus Family album. Otherwise it was much as usual, starting with the golden oldies Focus 1/Anonymus/House of the King and moving on to a nice version of Eruption then Sylvia and, form the more recent era, All Hens on Deck and finishing with La Cathedrale/Harem Scarem and finally Hocus Pocus. The encoure was Focus 2. No Focus 3 this time round. Two hours of sheer joy for most of us though some of the crowd appeared to be rather distracted. The support act featured Finnish Finnish vi=ocalist and slide guitar expert Erja Lyytinen.
No comments:

I have had opportunity now to listen to the new Focus album several times. It is difficult to review a Focus album early on as their stuff usually repays many, many plays and it is often not until the umpteenth play that the full subtleties of a recording are sometimes appreciated. So far one is very positive certainly.
There are appropriately 11 tracks on the album. As usual, most track are entirely instrumental but with one vocal track. This time it is How many miles? a sort of pop song with fairly juvenile English lyrics but s good track. Two tracks were previewed on the previous stop gap album Focus Family - Clair-Obscur and Winnie. I think they are exactly the same as on the previous album. The other retreads are the opening track Who's calling? a reworking with a nice opening riff of the final track on the 1985 album called Focus and featuring Akkerman and van Leer. The second track, Heaven, will be familiar to some as a reworking of the original version of My sweetheart. This track is on the final Focus Akkerman album Mother Focus but first saw the light of day coupled with Love Remembered in 1974 in a concert in Japan.
The other seven tracks appear to be brand new. The stand out at the moment is Focus 11, the closing track, which keeps up the strong tradition of excellence those tracks all have. All the tracks on the album are van Leer compositons except for Mare Nostrum by the new bass player Udo Pannekeet. Palindrome appears to be a musical experiment that might well have come off. Mazzel is a rare reference to things Jewish. In general, the tracks feature the usual mix of bass, drums, guitars, organ, flute, lots of piano and some occasional vocalisations from van Leer.
No comments: 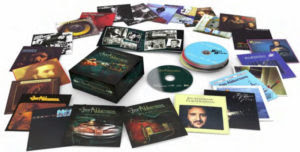 We hear that a 26 CD Jan Akkerman set is being released next month. UK pricing is around £99. Wouter Bessels, who compiled, annotated and mastered the set in collaboration with Jan, kindly put some background info online elsewhere. He says
The booklet will be substantial, yes, to say the least. 66 pages. A biography by yours truly, with several pages of photos from all eras of Jan’s career – including several previously unpublished shots, followed by an album-to-album breakdown, featuring full credits (including never before published facts about who played what on particular albums) and Jan’s own memories about the 23 studio and live albums, taken from recent extended interviews I’ve done with Jan. In addition there’s a cd featuring his personal selection of Focus tracks, with some pre-Focus stuff added (Johnny and His Cellar Rockers, The Hunters and Brainbox) and a cd full of previously unreleased stuff such as basic tracks from “Angel Watch” and “Stingray” (both without string and woodwind overdubs!) and the original demo for “Crackers” recorded in the Summer of 1975 with Pierre van der Linden on drums. That particular demo was recorded during rehearsals for the 1975 Japan/Australia tour of Focus for which Pierre temporarily rejoined the band.
Regarding the mastering: I have been working for almost a year to transfer the analog 2-track tapes – or digital safety copies in some cases – for most of the albums up to 1993. Expect some flat transfers (as some were very good and did not need to be enhanced – less is more), expect some carefully dynamically remastering on some albums (eg. the 1977 guitar in bed album – which sounds pretty hollow and too bright – I have carefully corrected that), a few needle drops (as some mastertapes have disappeared and/or were untraceable) and for the rarities cd: a variety of sources, from 2-track DAT, cassettes to 2-track analog / 2-track digital. ‘Subsequently all cd-masters were checked and prepared for production by Peter Brussee of QPoint mastering in Hilversum (The Netherlands) – no additional EQ’ing a.o. was done during that final process. I can honestly say that Jan’s back catalogue is now fully future proof!’
2 comments: 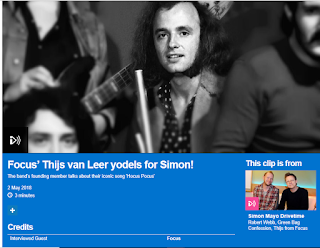 There was a brief interview with Thijs van Leer on Radio 2 yesterday evening. You can access the clip
here.
No comments: 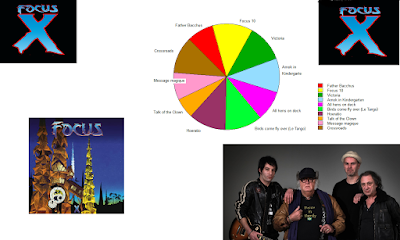 Chart showing the proportion of the album taken up by each track
No comments:

We are sorry to hear of the sad passing of Hans Cleuver. Born in Indonesia in 1947 he was a co-founder and first drummer for, Focus. From a musical family, Hans Cleuver drummed for the band during two periods - 1969-70 and 1997-98. He was also personal manager to both Thijs van Leer and Jan Akkerman at times and ran the multi-award-winning Cleuver Drumschool in Den Haag/the Hague. He was the husband of singer Bojoura and father to their children who include the drummer Emilie Cleuver.
No comments: