The 10 longest Focus tracks are

Though famed for their many longer tracks, Focus have plenty of shorter ones, many under 3 minutes. These are the top 10 stand alone tracks:

Places specific or not are sometimes mentioned in Focus titles.
Specific
La Cathedrale de Strasbourg
Sugar Island (Cuba)
Vesuvius (See Out of Vesuvius on Ship of Memories)
Rio in Brazil (See Rock and Rio and Brazil Love)
Non-specific
House of the King
Endless Road
The Bridge
No comments:

In the Focus titles famiy we have

They have all come to Birth
No comments:

Focus song titles are usually in English. These are the exceptions:

Spanish
De Ti O De Mi (From you or from me)

Latin
Delitae Musicae (Delightful music)
We could add too - Anonymus (Anonymous)
No comments: 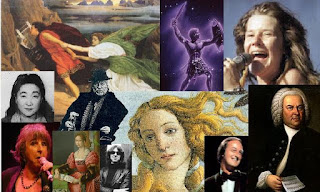 Some 15 Focus tracks refer to individuals real or imaginary.
Orfeus and Euridice are, of course, from Greek mythology as is Orion. Venus is from Roman mythology (as in Ode to Venus on Focus 9).
Nobody seems to know who Bennie Helder is. No doubt, like Elspeth of Nottingham, he is imagined.
Le Clochard (meaning tramp in French) could be included here and may be Anonymus.
Sylvia, of course, is Sylvia Alberts; Tommy, Tom Barlage; Pim, Thijs's grandson (not Pim Jacobs as I had guessed); Eddy, Thijs's father; Janis, Janis Joplin.
Tokyo Rose was the composite name given to a number of Japanese broadcasters of propaganda in World War II.
Father Bach refers to the composer J S Bach.
One should also mention Judy, as in Ole Judy on the 1985 album
No comments: 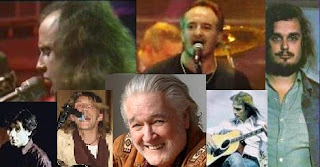 Surprisingly, perhaps, there are over 20 Focus vocal tracks of various sorts. Most of these feature Thijs Van Leer but there are a number of P J Proby vocals, of course, on the Focus Con Proby album and Bert Ruiter sang I need a bathroom on Mother Focus (though it is sometimes said that it is Akkerman). Akkerman can certainly be heard with Van Leer on Avondrood. Cyriel Havermans's voice is heard on Moving Waves. Jan Dumee sings briefly on Focus 8. On Focus 9 Jo de Roeck sings Just like Eddy.
No comments: 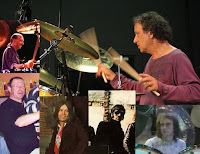 The main Focus drummer has been Pierre Van Der Linden who originally worked with Jan Akkerman in Brainbox. After leaving in 1973 he rejoined the band more than once. The original drummer was Hans Cleuver. In the early days on at least one trip Akkerman's late brother Cocky sat in. Other main drummers have been the Englishman Colin Allen, the Americans David Kemper and Steve Smith and the appropriately named Dutchman Bert Smaak. When the current Focus first reformed the drummer was Ruben Van Roon and in 2004 Hans van Oosterhout was playing with them.
No comments:

Of these there are really four. The current player is Bobby Jacobs. The longest serving was Bert Ruiter. The first was Martijn Dresden. On Moving Waves the credit goes to the man best known as Cyriel Havermans, although Jan Akkerman apparently did most of it. One also ought to mention Tato Gomez on the first four tracks of the 1985 Van Leer Akkerman album and Ruud Jacobs and his double bass on Beethoven's Revenge from that album.
No comments: 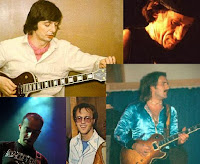 Down the years there have been just five Focus guitarists. Head and shoulders above the rest is the best and the original - Jan Akkerman. Since his departure following the Mother Focus album four others have sought to fill the role - Philip Catherine, Eef Albers, Jan Dumée (Focus 8) and Niels Van Der Steenhoven (Focus 9). In 1998 there was an abortive attempt to relaunch Focus with Menno Gootjes.
There has never been a problem with the technical compentency of such guitarists, they simply lack the flair and individuality of an Akkerman. In Catherine's case he was much more a jazz player than a rock axeman. Catherine is the only non-Dutchman, being a Belgian. Akkerman had quite a history before Focus (in various groups including Brainbox) and also after Focus as a solo artist.