Archive number: 97
Title: Neurotika
Main Album: Focus 8
Track number: 8
Genre: Progressive Rock Instrumental
Studio: Peptide Studio, Vuren
Length: 3' 42”
Composer: Thijs Van Leer
Musicians: Thijs Van Leer – Hammond organ, flute, voice; Jan Dumee – Guitar; Bobby Jacobs - Bass; Ruben Van Roon - Drums
Producer: Geert Scheijgrond & Focus
Engineer: Geert Scheijgrond & Dick Kemper
Label: Musea/Red Bullet
Date of recording/release: This track was recorded early in 2002. The presence of Van Roon on drums makes it a unique release. As for the eventual album - a limited run of 500 appeared in August to be followed by a general release on CD later that year. Also later on Paras and JVC Victor
Alternative version: None
Notes: This is the earliest recorded track by the Focus reincarnation that came about when the CONXI line up that had come together as a Focus tribute band was joined by Van Leer himself. Called a rehearsal track on the album listing, it is counted in by Van Roon (00:00-00:02) and is a mostly fast paced piece driven mainly by bass, drums, organ and guitar but being bolstered by Van Leer's voice mainly yodelling (00:18-00:28; 00:44-00:51; 01:07-01:12; 02:29-02:35, etc) and the flute (00:52-01:06; 01:36-01:45, 02:45-02:55) then with a guitar-led middle section (01:46-02:28). The guitar also leads twice with a slower, typically Focus, section at 01:13-01:35, and repeated at 02:56-03:19. We end with a ritartando or slowing down from 03:24 and a live finish.
No comments:

On first listening to Moving Waves

The first Focus album I ever heard was their second. Moving Waves, as it was called in the UK, appeared towards the end of 1971. It was initially on the Blue Horizon label (the label my first copy bore). I must have first listened to it in 1973, the year I turned 14. I had heard the single version of Hocus Pocus on TV but the rest of the album was unknown to me. Before buying it I borrowed a copy from my friend Gwilym Evans, already a fan. The cover looked good for the time with a nice purple colour and a small picture of the group on the front and a mainly red, black and yellow set up on the back. There were quite a few words on the back but not much information.
I guess I started with Hocus Pocus knowing I liked that already. At 6' 42" the album version is quite a bit longer than the single version and it was amazing to have it there pumping into the room, this really wild rock music and yet with these weird, sometimes quite primitive, bits and that crazy yodelling. Then after the blistering opening track it goes quiet and you get a Rodrigo style classical guitar and what sounds like an orchestra and I know we have gone really classical. Nice though. The third track is Janis and we're off somewhere else this time - somewhere very eastern. I like it but it's difficult to compare it with anything. The track after that is Moving Waves and now I really don't know which way is which. This weird piano and vocal piece sounds like something in a Dutch eisteddfod or something. The last track on the first side of the vinyl album is Focus 2. It is at this point that I am hooked. This is jazz - the sort of thing Michael Parkinson would come on stage to - and yet it's a rock band playing. What have I got here?
So I flip the thing over and now I'm anxious. Here is a piece that takes up the whole of one side. It is broken up into sections according to the cover but you can see by looking that there are no gaps between tracks. This is 23 solid minutes of music! So we listen and it is mostly jazz again, although at one point the guitarist does go quite wild (the Bridge, etc) and I like the ethereal voices that remind you of something from Holst. Eruption really did take several listens to get into and I would often get lost in one passage or another. I knew instinctively that this was good stuff though and worth persevering with. As soon as I had the money I trundled off to the shops (can't remember if it was the local independent retailer Sounds or the chain store Boots) and bought my own copy.
No comments: 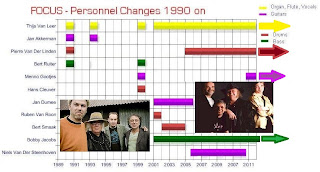 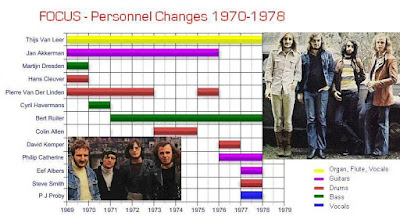 Labels: 13, 1971, Moving Waves, Videolink
Newer Posts Older Posts Home
Subscribe to: Posts (Atom)
Focus is the best of all bands
They are based in the Netherlands
Their mainstay is called Thijs van Leer
They play their music far and near
They play mostly instrumental
Sometimes rowdy, sometimes gentle.