Track by track 48b Avondrood 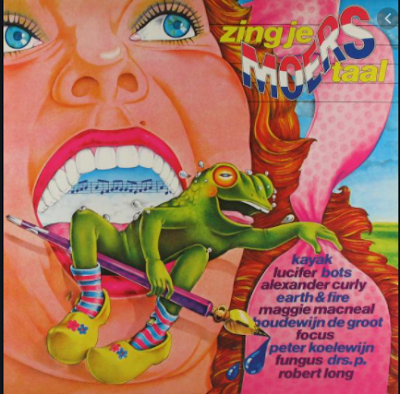 [O evening glow, glow of flames, O massacre in the west
O late rose, empty box, O mortal remains
O fellow-man, mother's lap, O unfulfilled desires
O bite of bread, child of death, O distance]
A note on Zing je moerstaal
Zing je moerstaal (Sing your mother tongue) was a compilation album. The cover shows a Dutch symbol, the frog with the wooden shoes, sitting in a singing mouth with a pen in his hand: the combination of music and poetry. In the word "moers" you can see the colours of the Dutch national flag: red, white and blue. The album was released in Holland by CPNB (Commissie voor de Collectieve Propaganda van het Nederlandse Boek - Commission for the Collective Propaganda of the Dutch Book) on the occasion of the Week of books 1976. On the album various Dutch pop musicians (Focus, Kayak, Maggie MacNeal, Fungus, Bots, Robert Long, etc) recorded works by different Dutch authors (Jules Deelder, Harry Mulisch, Theun de Winter, Wim de Vries, Bert Schierbeek, Simon Carmiggelt, etc). Focus knew of the works of the writer and poet Jules Deelder (from Rotterdam) before this recording was done. "Avondrood" was taken from his poetry collection De zwarte jager (The black hunter). It was chosen because of its regular structure and its positive sometimes unusual perspective.