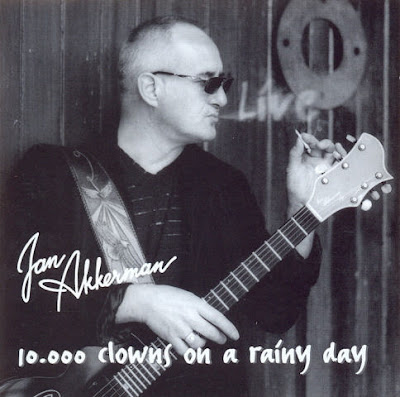 Before joining Focus Jan Akkerman had produced a solo album - the 1969 instrumental album Guitar for sale. While still with Focus he produced Profile and Tabernakel and the collaboration with Peter Banks (Two sides of Peter Banks 1973). Between the break up of Focus and the 1985 reunion with Van Leer in 1985 he produced several diverse albums, including a self-titled album (1977) and a live album with similar content the following year (Live in Montreux). The very classically oriented Aranjuez with Claus Ogerman also appeared in 1978. In 1980 the funky Jan Akkerman 3 appeared and in 1981 the Arab disco influenced Oil in the family. The 1982 album Pleasure Point covered diverse but more familiar territory as did It could happen to you (1985). Between these came the ZZ Top inspired From the basement. Alongside these albums came collaborations with jazz clarinettist Tony Scott (1977) singer Kaz Lux and drummer Pierre Van der Linden (1977 and 1980) and German keyboard maestro Joachim Kuhn (1978 and 1979) as well as others.
Since 1985 the albums have continued to come from time to time - Can't stand noise (1986) Heartware (1987) The noise of art (1990) Puccini's Cafe (1993) Blues Hearts (1994) Focus in time (1996) Blues Roots with Curtis Knight (1999) the acoustic Passion (1999) plus a number of live albums of various sorts. In 1989 Akkerman was on two albums from the heavy rock band Forcefield. He has been involved in several other collaborations and made many, many guest appearances. In 2003 the last studio album CU was produced, making use of then current techno or house production technique. Since 2003 several "unreleased albums" have appeared on the internet and in April 2011 the studio album Minor Details was released.