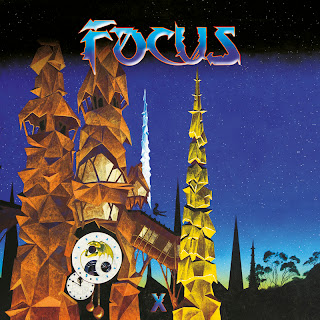 So amazingly Focus reach double figures with their tenth album. I have held back from writing about it until now as I know by experience that initial impressions can be wrong. Certainly the presence of familiar titles was offputting – a nod backwards in the opening title Father Bacchus (good joke though), yet another Focus track, Le Tango in its umpteenth incarnation, Message Maqique was on a solo album (that also featured Talk of the Clown, there called Pierrot). Van Leer insiders also know that the curiously titled Amok in Kindergarten was directly inspired by the Dunblane incident way back in 1996. Even the title All hens on deck made me nervous as I feared a re-hash of Hurkey Turkey. It turns out to be one of the most attractive numbers on the album.
In fact this is as good a post-Akkerman album as Focus have come up with so far. The only real problem is an over-dependence on Van Leer for the writing and performance, a Van Leer almost shorn of one of his attributes, his voice (his keyboard and flute work are better than ever). Van Der Linden's drumming is of a high order throughout but good drumming though important is a relatively small component in a rock album's make-up.
The opening track is a fine effort from the new guitarist Menno Gootjes, spoiled only by Van Leer announcing the band's name as if in a live setting. The track Focus 10 is fine, though since Focus 5 I feel that particular strand has not been working so well somehow. The third track is currently my favourite. Quite what inspired Victoria I don't know but the result is quintessential Focus. Superb! Amok in Kindergarten is contemplative and an adequate track for inclusion. After the up tempo All hens full of Van Leer scat we have an interesting version of Le Tango that justifies its inclusion by being re-titled Birds come fly over and featuring the veteran Brazilian musician Ivan Lins singing lyrics by Van Leer's ex-wife Roselie Peters (she also provides the spoken lyrics for Crossroads). The decision to hand over the mike to Lins was wise. Presumably there was a similar plan with Van Leer's daughter Berenice for the last track (she is credited but I do not hear her unless she is doing backing vocals). Hoeratio is better known as Horace in the English speaking world. Someone has spotted his reference to the flute in his ars poetica. Van Leer reads this in Latin over a slow Bobby Jacobs written piece that is again only adequate as far as I can see. May be it will grow on me. We then have the two tracks lifted from the 1986 solo album Renaissance. The use of acoustic guitar on the first of these tracks and on Le Tango is refreshing. So there it is a rock album with a lot of jazz or Latin influences but no obviously classical ones. Great guitar work from Gootjes and a solid rhythm section, Van Leer at the height of his powers for the most part.
The CD comes as a little book with artwork from Roger Dean, which adds to the overall enjoyment.