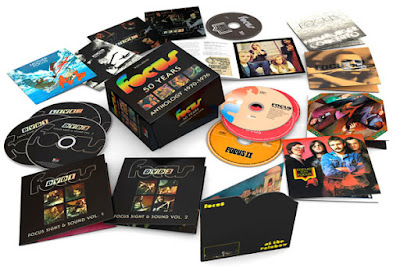 50 Years: Anthology 1970-1976 is a box set that contains the complete work of Focus between 1970 and 1976.
The set is curated by Focus/Jan Akkerman archivist Wouter Bessels whoe previously curated the 26 CD Akkerman box set. It features newly remastered versions of the first five studio albums all of which come with rare bonus tracks (single versions, alternates, rough mixes). Additionally, it includes the 1973 live album At The Rainbow, the Ship of Memories compilation from 1976 (which features 11 bonus tracks), the complete BBC In Concert 1973 gig taken from the original stereo master tapes and a disc of unreleased live performances.
Two DVDs (PAL, region-free) contain over four hours of audiovisual material taken from the archives of various TV stations around the world and include the first official release of the 1973 ‘Focus At The Rainbow’ concert movie, carefully restored from the original 16 mm film.
The box set comes with an inforative 80-page booklet with band history, liner notes and various memorabilia.

I pre-ordered this last year, and it is one of the best things I've bought in a long time. One question though, who is the bass player on the short live 1970 snippet ? It doesn't appear to be Martijn Dresden.