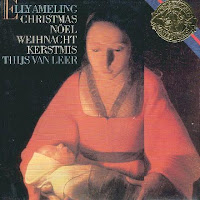 I remember once hearing that Simon and Garfunkel split over a religious difference. There is apparently no truth in the rumour. A conspiracy theorist might stand a better chance of trying to explain the Thijs van Leer, Jan Akkerman split in such terms.
I've highlighted the religious element in Akkerman’s music elsewhere. When it comes to van Leer the task is pretty straightforward.
In 1981 the van Leer penned album Donna Nobis Pacem (Give us peace - a phrase from the Agnus Dei in the Mass) was released with three other artists under the name Pedalpoint. With Latin and Greek lyrics, it is basically a traditional mass with one or two other bits thrown in using modern tunes (some recycled from elsewhere). The three main parts are the Kyrie, Credo and Sanctus. In the sleeve notes, van Leer gives thanks to the Lord for it all. He has said "I was always very interested in the Mass of Johannes Sebastian Bach, the High Mass. The whole form and concept I have been fanatical about and I always wanted to write a Mass." Straddling the classical and rock genres as it does it is one of his best solo albums.
Two or three albums chiefly of hymn tunes have also appeared (The glorious album and Instrumental hymns, also released in Holland as De Mooiste Liedere – The best songs). Van Leer is not over proud of these as they can tend toward a Claydermanesque muzakishness in places but at times they are worthy to be ranked alongside some of the fine Introspection tracks.
Then there are the four Christmas albums. The first was Music per la notte de natale (1976) featuring 11 Christmas hymns in a classical style, with Louis van Dijk, Rogier van Otterloo and others. Then came the similarly conceived Kerst met Thijs van Leer en Elly Ameling in de Grote Kerk te Monnickendam (1982) with several Christmas carols. There was also Joy to the world, which like the more down home Kerstconcert was produced with diverse contributions from family members and others and includes several carols.
Of course, when we speak of the religious element in van Leer’s music the name of J S Bach can never be far away. Van Leer is on record, back in 1976, as saying that he and Akkerman ‘always agreed that our ideal composers were Bach and Bartok.’ He goes on to say that ‘Bach always has that radiance, knowing it was the music of the truth of Jesus Christ ... Rock could still be the language of our day in that way.’ Years later in 1999 he was one of several musicians to celebrate the 250th anniversary of Bach’s death in 2000. He released Bach for a new age which featured well known pieces, including reworkings of Erbarme dich from the St Matthew Passion; Jesu, Joy of Man’s Desiring; Sheep may safely graze; Ave Maria from the well-tempered clavier and Agnus Dei from the Mass in B minor. Most of the tracks had previously featured, differently arranged, on the delightful Introspection albums that appeared mainly in the seventies and were so successful. They include several religious pieces chiefly from Bach and Handel.
It would be wrong to think that the religious element of the music is confined to the solo output. Even in Focus days it was a feature. Several early albums include what amounts to a hymn from van Leer. On Moving Waves it is the title track, a setting of the words of the Sufi Muslim Inayat Khan. On Focus 3 Latin verse from Virgil breaks up the raucous Round goes the gossip. On Hamburger Concerto it is simply an old Dutch Christmas hymn inserted into the title track. Perhaps where the first and last original Focus albums went wrong (if they did) was in not including a hymn!
(On the subject of Sufism I should also add that van Leer's mother had an interest in the subject and in at least one place he credits the name Focus to what she had learned reading about it.)
The more one looks for this religious element the more one sees it. It is there in a title like Carmen Elysium (Introspection 2) for example (later reworked as P’s March on Ship of Memories) and in a track like La Cathedrale de Strasbourg which is ostensibly about camping holidays but has bells, church organ and an 'Amen'. What about his penchant for speaking and singing in tongues, evidenced on some more recent recordings? In an interview not so long ago van Leer made a rare reference to being Jewish. Such a revelation may come as a surprise when one considers the amount of Christian harmony in his output, however a closer listen might perhaps reveal a strand of Jewishness making up yet another element in the van Leer repertoire and proving a further factor to note when considering what makes it so attractive. In an interview in 2003 he ended with a message to fans saying "Dearest fans, please pray for us FOCUS so that we have the power to continue our beautiful work of sharing our music ..."
As mentioned elsewhere, since writing the above I have discovered that one of the very first records featuring Akkerman and van Leer was Woord voor Woord where the actor Aart Staartjes tells the story of Moses and our two maestros provide the music. The sleeve notes are by a Rev Wim Koole and reveal that the contents were successfully broadcast on Dutch TV in 1969. I knew I was on to something!
In 2010 van Leer performed before the Pope in Rome with the Italian Prog Rockers Nuova Raccomandata Con Ricevuta Di Ritorno. An album was made of the performance. On Focus 11 the track Mazzel appears. The title is of Hebrew or Yiddish derivation and means "Good luck" in Dutch.