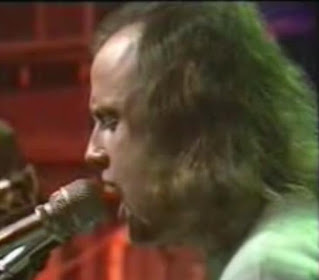 When it comes to the vocal element in the music of Thijs van Leer then there is a lot more to say, particularly in the life of Focus. Not that there is a vast amount of vocal work but what is there is mostly the work of van Leer himself.
We begin with straightforward vocal work – songs with lyrics, usually a few verses and a chorus. Such songs are not uncommon on the first Focus album (In and out of). Black Beauty, Sugar Island, Why Dream and the opening of Focus (vocal) all feature a very Dutch and youthful van Leer singing a variety of lyrics (Happy Nightmare is sung by Martijn Dresden). The only other Focus album with so much lyric content is Focus con Proby (also four such songs). This time P J Proby is drafted in for the role (one track, Eddy is also on Focus 9 using yet another singer; lyricist Roselie Van Leer sings it on the solo album O my love!).
On other albums the lyric content is sparing – the hymns on Moving Waves and Hamburger Concerto (Moving Waves and O kerstnacht, schoner dan de dagen), the repeated line of Round goes the gossip on Focus 3 (which also includes spoken words in Latin), the few French words of La Cathedrale de Strasbourg (Hamburger Concerto) and I need the bathroom (Mother Focus) - again not by van Leer. There is also Flower Shower (bonus track on Focus 8). It's anyone's guess as to what is going on there. On Focus 8 (Tamara's move) the spoken part of Round goes the gossip is parallelled (by Jan Dumee not van Leer) and on Focus 9 we have a litany of Focus tracks spoken as a sort of poem in European (Rap)sody – as well as other uses of the voice. Focus X features vocals on two tracks and spoken Latin on Hoeratio. On The Focus Family Album van Leer sings on Birds come fly over and on Focus 11 on How many miles?
This brings us to the sizable number of tracks where, though there is no lyric, van Leer's voice is still heard. Most famous is the yodelling on Hocus Pocus. Also check out these tracks - Love remembered, Sylvia (Focus 3); Answers? Questions! Questions? Answers! (Live at the Rainbow); Harem Scarem (Hamburger Concerto); Mother Focus; Rock and Rio, Hurkey Turkey, Aya Yuppie Hippie Yee, Neurotika, Sto Ces Raditi Ostatac Zivota? (all on Focus 8); Remember Mozart, Brazil Love (Focus 9); Father Bacchus, All hens on Deck (Focus X) and the relevant parts of Eruption and Hamburger Concerto. Even Focus 2 has a very brief vocal at the end.
When we turn to van Leer's other output there is not so much to report. The Beauty of Bojoura which van Leer produced for Hans Cleuver's wife has a lot of lyric content from Bojoura. Van Leer himself can also be heard in the background. Perhaps the album with most lyric content (from van Leer and others) is the Pedal Point album Dona Nobis Pacem with many vocal tracks in Greek and mostly Latin. Four tracks on the 1975 album O my love! have lyrics. Van Leer sings Fisthearted, his then wife Roselie, Eddy and O my love! She also contributes a minimal lyric to The gleeman tonite. On the Introspection albums we occasionally hear the voice of Letty de Jong. Nice to have met you (1977) features backing female vocals on some tracks. On Reflections (1981) the Gerald Brown Singers provide the vocal for La Cathedrale.
The hymn albums purposely drop the vocals as do the Christmas albums in the main, although Ely Von Ameling sings on certain tracks on the 1982 album as does a choir on some tracks on the Kerstconcert album of 2000. On the 1987 album I hate myself for loving you some van Leer yodelling is heard but the actual vocals are done by the lyricist, Michael Gillespie.
Van Leer uses some sort of voice distorter on I'm not in love (Reflections) and the Hocus Pocus version on Nice to have met you. Van Leer scat work can be found on St Thomas (Hommage aan Rogier van Otterloo) and the live album with Thomas Blug Live in Raalte. We get various exercises in the use of the larynx also on the fascinating experimental DVD Etude sans gene. One thing to recall in any discussion of van Leer and vocals is that one of Focus's greatest hits Sylvia was originally written with words and intended to be sung. Various factors led to making it an instrumental as Focus pursued the production of what van Leer once called (taking a phrase from Mendelssohn) 'songs without words'. A similar thing happened to Victoria on the album Focus X.
As a sort of postscript we note that van Leer can be heard whistling on the following tracks – Hocus Pocus; La Cathedrale de Strasbourg; Black Beauty (instrumental), Pim; Hommage A` La Femme (Renaissance); Flute Blues (Hommage aan Rogier van Otterloo); Tango (Kerstconcert); Prologue on the DVD Etudes sans gene.

This DVD is nice!