Focus at The Scene in Swansea 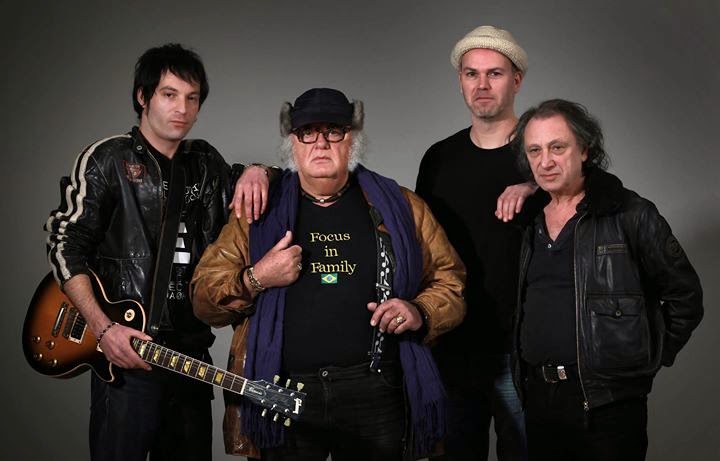 My son is in university in Swansea so I thought I'd pay him a visit as Focus were playing at a place called The Scene on a Monday night, a good night for me (November 24).
My attachment to Focus goes back to my teenage years when I was born again and wanted to find a rock band that would not corrupt me! It is a little like paying homage. I had duties here I London on Monday afternoon so didn't get away as early as I hoped and with traffic and so on did not reach the venue until just after Focus had started. They were just coming to the end of House of the King when I got there. I guess they would have started with Focus 1.
The first half was all the old stuff including a brilliant Eruption, including Tommy, Sylvia and so on. The newer stuff didn't get played until the second half. It is hard to put into words what a brilliant band this is. The only low point for me was at the end of a ripping Harem Scarem where Menno Gootjes was left more or less to himself. It left me rather cold. Interestingly, because it was like something out of the seventies. Focus were never like something out of the seventies but always transcended the decade.
One treat at the concert was seeing just a few people dancing at the front to the rock numbers. The flute passages were also an immense treat.
During the interval I bought the new double helping of Swung where the band minus Van Leer jam. Interesting stuff. Van Leer's wife Anneliese runs the shops. She has no English (and I no Dutch). I said Thank you very Dutch. She said "What is Dutch?"!
The main set closed with an excellent Hocus Pocus, which now includes a second extended drum solo for the amazing Pierre Van Der Linden. As I watched him endlessly work his way round the kit it made me wonder have I ever preached at all? Here is a man who knows his drums better than I know any text I've preached. Surely I should be immersing myself in the texts week by week. Yes, you may not be appreciated (a Van Der Linden drum break is not to everybody's liking) but you will be thorough.
So by the end of the concert I was pretty impressed and would have been happy to leave. There was some enthusiasm for an encore, however, and the band returned with Focus 3, a beautiful number that has grown and grown on me over the years, and its partner Answers Questions Questions Answers. The flute playing at this point was beyond beautiful and I was gone. Amazing.
If you have opportunity to go to see Focus. They are worth every penny. Sorry I have no video footage or pictures. I left my camera in the car.
No comments:

Labels: 35, P's March, Ship of Memories, Videolink
Newer Posts Older Posts Home
Subscribe to: Posts (Atom)
Focus is the best of all bands
They are based in the Netherlands
Their mainstay is called Thijs van Leer
They play their music far and near
They play mostly instrumental
Sometimes rowdy, sometimes gentle.