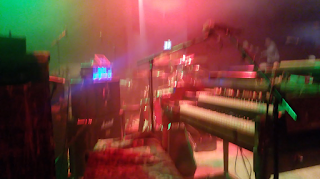 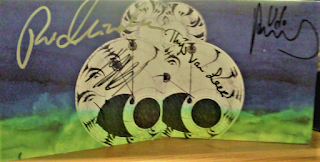 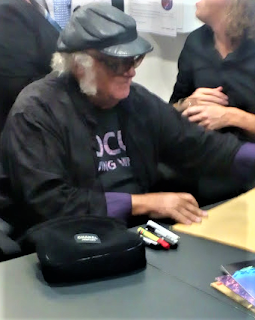 It was fun to be at a Focus Concert once again. I have seen them in The Stables. Milton Keynes before. It is a little sterile but it was good to see nearly 400 present. I ended up with a front side row seat just a few feet from Thijs van Leer himself. It was not a great spot in some ways but it gave certain advantages. We had the usual run - Focus 1, Anonymous, House of the King to begin; Eruption, Sylvia and La Cathedrale with Harem Scarem elsewhere; Hocus Pocus to close and Focus 3 with Answers Questions, Questions Answers as an encore. We also had All Hands on Deck, which I have heard before and, for the first time for me, P's March.
Being as close to van Leer as I was I observed how he mostly only used one hand to play the battered old Hammond organ he sat at most of the night. He also played the flute with one hand at times (sometimes combining flute and organ). He also played the haunting alto flute at the beginning, the simple melodica on Le Tango and did various things voice wise - scat, singing, whistling, yodelling, throat singing and oohs and aahs, usually with the vocoder. The high note on Hocus Pocuss are no longer possible but Thijs still has a very good singing voice.
I enjoyed all the solos from the band in the main, including new man Udo's six string bass. Still not sure about all of Menno's.
The evening began with an elderly heavy metal outfit called Burnt Out Wreck who were alright for what they were. After the main event the band happily signed autographs and chatted. I bought the latest offering (already purchased on itunes) and had it autographed. I also persuaded Pierre van der Linden to give me a signed drumstick.
No comments:

Labels: Live, Milton Keynes, Pierre Van Der Linden, The Stables
Newer Posts Older Posts Home
Subscribe to: Posts (Atom)
Focus is the best of all bands
They are based in the Netherlands
Their mainstay is called Thijs van Leer
They play their music far and near
They play mostly instrumental
Sometimes rowdy, sometimes gentle.