Live at the Underworld March 2016 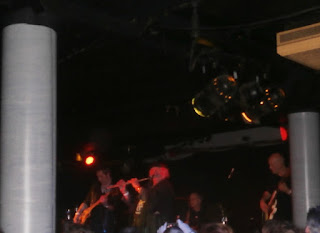 Really enjoyed Focus at the Underworld in Camden last night. A packed audience gathered first to hear Earls of Mars (rock on the heavy and loud side and not really my cup of tea). Focus were as amazing as ever from the opening Bach flute lines through to Hocus Pocus and the Focus 3/Answers Questions encore. There were genuine classical, jazz and rock moments and some fine playing by Menno Gootjes. I'm still not entirely convinced about the solos from Gootjes and Booby Jacobs on bass though Pierre Van Der Linden and Thijs Van Leer can do no wrong as far as I'm concerned. The bonus this time round was a two hour twenty minute set without a break. It's a short tour and so the usual intermission was dispensed with. One Van Leer trick new to me was making a whistling sound with a glass of water in the encore. With the flute, organ, vocals, whistling, melodica, scat, tongues, etc, Van Leer did not put a step wrong. Good to speak briefly with Thijs and Menno before leaving. I should have asked for a photo opportunity but none of my cameras seemed to be working properly.
The set list was Focus 1/Anonymous, House of the King, Ode to Venus, Eruption, Sylvia, Brother, Le Tango, All hens on deck, La Cathedrale de Strasbourg/Harem Scarem, Hocus Pocus with Focus 3 and Answers Questions as an encore.
No comments:

Labels: Camden Town, Live
Newer Posts Older Posts Home
Subscribe to: Posts (Atom)
Focus is the best of all bands
They are based in the Netherlands
Their mainstay is called Thijs van Leer
They play their music far and near
They play mostly instrumental
Sometimes rowdy, sometimes gentle.