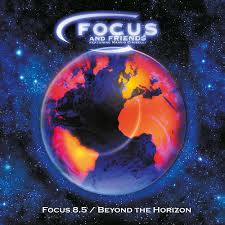 It is possible to get hold of some unofficial material by Focus on an album called Focus 8.5. Subtitled Old skin, it is a collection of five tracks from sessions completed before the departure of Jan Dumee. The same title has been used, but now with the subtitle New Horizon, for a fresh collection of some seven tracks, again from the Dumee era. The album perhaps answers the question of what might have happened if Focus had determinedly struck out in a jazz direction rather than a rock one.
Technically, none of these tracks is by Focus - that is by the four piece rock band as it existed in 2005. Rather what we have is van Leer and the others supplemented by other musicians, in and out of Focus. The opening track, for example, Focus Zero (a pastiche of Focus style tunes), features Thijs on flute and piano with Pierre on drums but with three Brazilians on bass, guitars and teclados. Track 6 (Talking rhythms) features Pierre with Marcio Bahia. On Track 3 (Rock 5) a very Focus sounding number, Bobby Jacobs on bass is the only Focus element, the other eight contributions (including the flute) coming from other (Brazilian) musicians.
Although very acoustic and World music in style, the album does have a Focus feel, with one vocal track (Hola, como estas?), the use of handclaps and voices, plenty of varied time signatures. The vocal track does actually feature a Focus foursome but supplemented by Brazilian voices and Marcio Bahia's drums. Perhaps this very good album should have come out under van Leer's name.
No comments:

Live at The Scene October 2016

I was able to catch Focus one again at The Scene in Swansea last night. The set list was fairly typical in that we started with the oldest material (Focus 1 with Anonymus and House of the King from the first album) followed by a very long and varied exposition of the Eruption theme (Eruption appears on the second album). We then had the famous Sylvia (from Focus 3) and (more unusually) excellent renditions of All Hens on Deck (from Focus X) and Hurkey Turkey 2 and Le Tango (from Focus 8 - the first not a track I recall being covered in a long while). We then had La Cathedrale and Harem Scarem (I am still not convinced about all that goes on under this heading but Menno Gootjes' violining was of a high order). We finished with Hocus Pocus, introduced by some excellent solo Bach flute. Pierre van der Linden appears to have another new  drum kit and somehow he was able to notch things up even further once again in an amazing solo that beggars belief. (How it happens that a piece surely made for the guitarist to show us his skills in becomes a drum tour de force I have complained about many times in the past). As so often in the past this was familiar but excellent stuff and certainly not a simple rehash of past glories. Several songs had been worked on afresh. I had never heard the recording of the bells of Strasbourg play as they were last night, for example. Thijs may not be able to reach the high notes any more but he gets deeper and deeper with those low notes as the years go by. For a 68 year old he is pretty remarkable. As ever he was a good showman and full of self-effacement in his presentation. It was good to shake his hand after the gig and get him to sign my copy of Focus 8.5 on sale at the gig. (I had bumped into Bobby the bassist earlier in the loos!).
No comments:

Labels: Live, Swansea
Newer Posts Older Posts Home
Subscribe to: Posts (Atom)
Focus is the best of all bands
They are based in the Netherlands
Their mainstay is called Thijs van Leer
They play their music far and near
They play mostly instrumental
Sometimes rowdy, sometimes gentle.