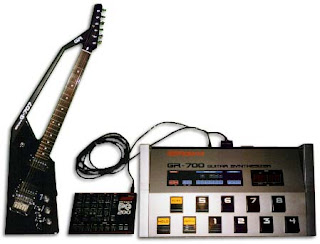 Though never exactly at the very cutting edge of technology, in their day Focus were not slow to use musical technology as it became available. Van Leer used the Mellotron on the first albums and later various synthesisers and other electronic keyboards. Akkerman similarly used various guitar pedals and both an electric sitar and a talk box on Mother Focus alongside rhythm or drum machines. It is no surprise then that when the two reunited for an album in 1985 both brought fairly state of the art synthesizers to the table, namely the Fairlight CMI and the Roland G-707 in combination with the GR-300 and GR-500. It was also Akkerman who programmed the Linndrum. The LinnDrum is manufactured by Roger Linn's Linn Electronics was released in 1982 as a successor to the Linn LM-1. It had 15 drum sounds sampled from real drums, a sequencer for programming rhythm patterns and five trigger inputs.

The Fairlight CMI (Computer Musical Instrument)
This was the first polyphonic digital sampling synthesiser. Designed in 1979 by Fairlight founders Peter Vogel and Kim Ryrie, it was based on a dual microprocessor computer designed by Tony Furse in Sydney, Australia. It rose to prominence in the early eighties and competed in the market with New England Digital's Synclavier. Both instruments featured in the work of famed eighties producer Trevor Horn.
The first people to buy the Fairlight were people like Herbie Hancock, Peter Gabriel, Todd Rundgren and Stevie Wonder. Among the first commercially-released albums to incorporate it were Kate Bush's Never for ever (1980) and Jean Michel Jarre's Magnetic Fields (1981). Another early user was Alan Parsons (Sirius, Eye in the sky) and later Yes. It can also be heard on U2's The unforgettable fire (1984).
The Fairlight was a development of an earlier synthesiser, the Qasar M8, an attempt to create sound by modelling all of the parameters of a waveform in real time. Unfortunately, this was beyond the available processing power of the day, and the results were disappointing. In an attempt to make something of it, Vogel and Ryrie decided to see what it would do with a naturally recorded sound wave as a starting point. To their surprise the effect was remarkable, and the digital sampler was born.
By 1979, Series I was being demonstrated but sound quality was not quite up to professional standards, having only 24kHz sampling. It wasn't until Series II (1982) that this was rectified. In 1983 MIDI (Musical Instrument Digital Interface – an industry wide digital system) was added with the Series Iix. In 1985 Series III supported full CD quality sampling (16bit/44.1kHz).
The Fairlight ran its own operating system (QDOS a modified version of Motorola MDOS) and had a primitive (by modern standards) menu-driven GUI. The basic system used a number of Motorola 6800 processors, with separate cards dealing with specific parts of the system, such as the display driver, keyboard interface, etc. The main device for interacting with the machine apart from the keyboard was a light pen, which could be used to select options presented on a monochrome green-screen.
The Series III model dropped the light pen interface in favour of a graphics tablet built into the keyboard. This model was built around Motorola 68000 processors, running Microware's OS-9 Level II operating system (6809 version). One of the Fairlight's most significant software features was the so-called "Page R", a real time graphical pattern sequence editor, widely copied on other software synths since. The feature was often a key part of the buying decision of artists.
The Fairlight CMI was very well built, assembled by hand with expensive components and consequently highly priced (c £20,000 for a Series I). Although later models, adjusting for inflation, were getting comparatively less expensive as the relevant technology was getting cheaper, competitors with similar performance and lower prices started to multiply. Fairlight managed to survive until the mid-eighties, mainly bidding on its legendary name and its cult status, sought after by those that could afford its prices.
Fairlight went bankrupt a few years later owing to the expense of building the instruments. As a last-ditch attempt to salvage a small something, the final run of machines were marketed as word-processors. Peter Vogel said in 2005 "We were reliant on sales to pay the wages and it was a horrendously expensive business ... Our sales were good right up to the last minute, but we just couldn't finance the expansion and the R&D."

The Roland G707 Guitar synthesiser
The Roland Corporation is a Japanese manufacturer of electronic musical instruments and similar items founded in 1972 by Ikutaro Kakehashi. Since 2005 its HQ has been in Hamamatsu. It has existed in different forms since 1960, making it one of the oldest still-operating manufacturers of musical electronics, and has survived changes in technology to become one of the most noteworthy and widely-used brands in electronic music and production today.
In 1977 the Roland GR-500 became the first commercially available guitar synthesiser. The synthesiser module included bass, solo synth and string sounds based on previous orchestral and analogue mono-synths from Roland. There are a number of sliders to adjust the VCO, VCF, VCA and LFO sections, but no memory to store your edits. The synth module is controlled by a "highly modified" guitar. It utilized a special pickup system that connected to the synth module via Roland's own 24-pin interface and controlled it using CV/GATE signals generated by the guitar's pickup system while playing the guitar. In addition to the modified pickup, there were magnets under the face of the guitar that could increase its sustain. Performance accuracy was "iffy" but good for 1977 and pre-MIDI. It was used by Lou Reed, Jimmy Page, Mike Rutherford (Genesis) and others.
The G-707 model, which is a guitar, first appeared in 1984 and included MIDI. The addition of a stabiliser bar running from the top of the neck to the bottom made it look quite different to previous models. The bar was created supposedly to defeat "dead spots" on the guitar where a neck might not send full tracking info to the floor unit. The originally designed tremolo unit featured 16-millimetre ball bearings on the pivots and the roller bridges to keep the strings in tune at all times. The G-707 had a maple neck, rosewood fingerboard, alder body and the stabiliser was made of expanded ABS resins. It came in three colours: Silver, Red, and Black.