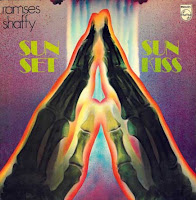 There are a small number of almost forgotten tracks that are not exactly by Focus but that technically do feature the band.
The oldest of these are the 1969 or 1970 recordings of the Amsterdam cast of the controversial musical Hair. Van Leer, Akkerman, Dresden and Cleuver form the nucleus of a 10 piece orchestra led by Del Newman with the cast singing. They can be heard, for example, on the opening introduction to Aquarius and the closing Hare Krishna. From that period there is also a short recording with Ronald Snellenberg called Mijn Overtuiging.
In the same period Van Leer was working with Ramses Shaffy and on an album containing two long tracks on each side, Sunset and Sunkiss, the whole band plays on Sunset. In 1969 a Ramses Shaffy single (the highly didactic The shrine of God b/w Watch out for the ugly people) appeared with Focus as the backing group. Slightly later, Van Leer was involved in producing an album by Hans Cleuver's wife Bojoura (Beauty of Bojoura) and the band again appear on The Last Thing On My Mind. (The Akkerman, Van Leer composition Why do they go back home seems to feature Akkerman, Van Leer and Dresden but not Cleuver.)
In 1973 Focus' bassist Cyriel Havermans left to make a solo album (Cyril) and called on his former colleagues for help. Pierre Van Der Linden is on several tracks usually with Van Leer but Share Those Dreams is the only track featuring Van Leer, Akkerman and Cyril.
It is perhaps also worth mentioning here that Jan Akkerman performed with the Van Leer Band in the 1980s but no official recordings were released.
(For the Ramses Shaffy single check here)