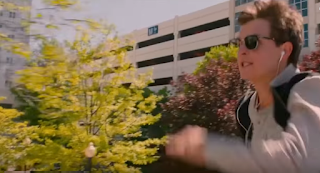 The Focus track Hocus Pocus features alongside a host of other tracks in the new film Baby Driver. Most of the track is played and becomees integral to the shoot out taking place among police adn rival gang members. This is not the first time the track has been used in this sort of way. It also features in a shoot out scene in the 2014 version of Robocop. (It wa also used for  aNike advert remixed some years back).
This time round one especially notes the way at one point gunshots and guiter chords are synchronised. Hopefully it will be a means of introducing younger people to the work of one of the greatest bands ever.
In an interview for Variety director Edgar Wright is asked
Is there an evangelistic element for you, that you might be introducing millennials or even younger people to some classic rock and soul and jazz they wouldn’t otherwise hear? Who wouldn’t want to be introduced to Focus and “Hocus Pocus”?
He answers
I keep saying to people, “If you love the song, watch them performing it on YouTube. It’s astonishing.” I mean, that’s how I know that song, is because there used to be a British music show called “The Old Grey Whistle Test,” which is slightly before my time, but there’s a great DVD of that, and the clip of Focus is amazing.
They go on
“Hocus Pocus” was famous in the ‘70s but hasn’t been kept alive much since then, so it’s hard to explain to people that it’s one of the most exciting rock songs ever recorded… and it has both yodeling and flute.
He adds
Yes. And accordion!
I speak no Dutch but I also liked this comment on one Dutch website.
De 46 jaar oude hit Hocus Pocus van de Nederlandse rockgroep Focus is prominent aanwezig in de actiefilm Baby Driver.
Wright says that the Hocus Pocuus part was his favvourite part - mine too. He also claims the studio was not going to use the track but he was so keen to use it that he paid himself for two extra days of filming. Good call.
Check out this video from 8 minutes to get a tiny taste of the scene.