Focus Under the Bridge London 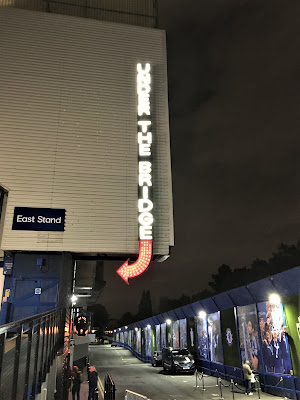 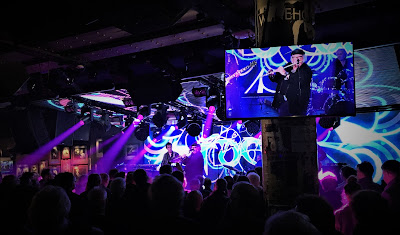 I have been to Stamford Bridge, Chelsea's ground, more than once but I had not really noticed that under the East stadium near the Shed end there is a venue called Under the Bridge, Last Friday night I and a ministerial friend (who I convinced about Focus last time they were in town) were among a couple of hundred squeezed into this state of the art setting. (A light show is a rare treat at a Focus gig but appreciated - I think the visuals man must have a sense of humour as we had a picture of crocuses as we started on Hocus Pocus or as Jan Akkerman would surely have rechristiened it Focus crocus!). We caught most of Chantel McGregor's set which was of a high standard. She plays guitar and sings with a bass and drums rhythm section. Of course, once Focus stepped on stage were into a whole new zone with each member of the band making a solid contribution that was rewarded with a solo slot for for each - more in some cases. Van Leer was on form with the complete array of two kinds of flute, organ, melodica, scat, whistling, throat singing, lots of vocoder and a brief vocal on the opening song.
The set list began as usual with some very early stuff - Focus 1, a little Anonymus and House of the King. We then had a version of Eruption, good but not outstanding on this occasion I thought. We then moved on to some more recent stuff - Winnie and the simple but effective All hands on deck with the essential Sylvia in the middle.
We then had some songs rarely heard, if ever - Focus 4 (!) from Mother Focus and Focus 6 which has never appeared on a Focus album (I can only find it on a van Leer solo album. You can hear a recent live version here.). Between these we had Who's calling? originally on the Akkerman van Leer Focus collaboration of 1985 but recently revived on the Focus 11 album. Staying with 1985 material we then had a very fine version of Le Tango with melodics, whistling, etc. Before tackling that Thijs remarked on the presence in the audience of former wife Rosalie Peters who wrote lyrics for  this and other songs. We then had two numbers from Hamburger Concerto regularly played back to back La Cathedrale and Harem Scarem. In the second, van Leer takes opportunity to make himself scarce. So we had solos from Menno Gootjes and Udo Pannekeet on six string bass. Van der Linden had had one in Eruption and was to get another very full one on the penultimate track.
The set of over two amazing hours (no-one in the band showing any signs of tiring) closed with the usual Hocus Pocus and then slightly over they plumped for Focus 2 (rather than Focus 3) as the closer. Stupendous stuff.
There was an opportunity to meet the band but there was a rather long queue and so we decided to head off.