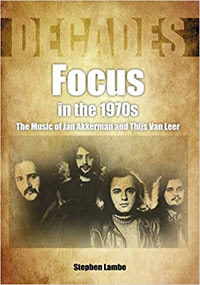 A new book has recently appeared on Focus in the Seventies. By Stephen Lambe, the book endeavours to guide the reader through the band's early history year by year, up to the end of the seventies. It deals with eight Focus albums song by song and gives the same treatment to Akkerman and van Leer's solo work 1970-1979. It claims to be a potted history of the band and an insight into the tensions which lead to such a creative - if short lived - peak and "an essential guide to the astonishing music the two men made while at the peak of their powers." Like so many books of this sort it labours under the difficulty of being so appallingly proof read (I'm not sure any attempt was actually made beyond using a computer spell check). The album by album analysis is not appealing to the casual reader either. The approach is to have Lambe voice his own opinion about the music, which is fine where you agree but more difficult where you do not. Apparently, Eruption is brilliant but Anonymus not so and the Introspection albums are too much of their time. It's nice to hear opinions I suppose. It's greatest achievement is to have persuaded me to buy the latest Focus Collection, the fifty year anthology. Anyway, if you are a Focus fanatic do buy it. PS Mr Lambe, please please let me proofread a second edition.