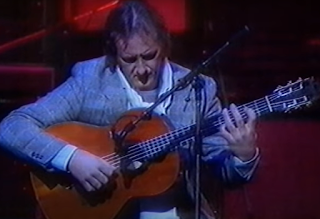 Tabernakel (1973), Akkerman's third solo album, is again diverse but has several classical elements. On Javeh and Lammy, especially the Amen, the classical input is strong and never far away. However, it is again on the lute tracks that it is most obvious. There are three tracks by John Dowland (1663-1626), ‘the greatest lutenist of his age’. The album opens with Britannia (the track played at the Rainbow) and features an orchestra and rhythm section. We also have two galliards (quick and lively Elizabethan dances), The earl of Derby, his galliard and another, simply here called A galliard. Dowland is revisited on track three of the later Live at the Priory for Heavy Sleep (better known as Come, heavy sleep). The second Tabernakel track is Coranto for Mrs. Murcott by Francis Pilkington (c1565-1638), on solo lute. We also have a galliard from Anthony Holborne (c1584-1602). His Last Will and Testament later features towards the end of the Lammy suite. An Elizabethan courtier, Holborne was possibly a lawyer and cultured well beyond the confines of music. He was also involved in diplomatic missions on behalf of Elizabeth’s secretary of state, Sir Robert Cecil. His best known publication was his Pavans, Galliards, Almains and other short Aeires published 1599, just three years before his premature death. The other two solo lute tracks on Tabernakel are A pavan (a more stately Elizabethan dance form) by Elizabethan composer, businessman and spy Thomas Morley (1557-1602), no doubt from his book of lute pieces The first book of ayres and A fantasy by the Italian Laurencini of Rome (c1550-1608).
The self-titled 1977 Jan Akkerman album features more jazz than classical music. The title Pavane, however, shows where Jan had been musically and Gate to Europe, featuring acoustic guitar and strings, is in classical vein. Something similar could be said of the album Eli made with Kaz Lux in 1976.
In 1978 Jan made an album with the German classical arranger and composer Claus Ogerman (1930-2016). Later bearing various titles, the album was originally called Aranjuez. That title drew attention to the opening track – the adagio from the Concierto de Aranjuez by blind Spanish composer Joaquin Rodrigo (1901-1999), an inevitable choice perhaps. Other classical composers featured are Heitor Villa-Lobos (1887-1959). Author of over 2000 works, this experimental Brazilian composer drew on folk music and many diverse sources. Here Jan plays The Prelude from Modinha and The seed of God from Magdalena. Track four on the album is by 17th Century guitarist and composer Gaspar Sanz (1640-1710). He published one of the earliest books on guitar playing in 1694, Espanoleta. That track is followed by Pavane pour une infante defunte, an early work (1899) originally for piano, by French composer Maurice Ravel (1875-1937).
In the seventies Akkerman also performed with the classical guitarist Paco de Lucia (1947-2014) but after 1978 there was perhaps something of a retreat from classical themes, although one does find it, for example, in Valdez on Pleasure Point (1981) and on the 1987 album Heartware in Winterborn Lyric and Firenze. It comes out, less obviously in Prima Donna from Art of Noise (1990), which is apparently about the opera singer Maria Callas (1923-1977).
With the release of the excellent Focus in Time in 1997 we return to classical themes big time. The opening track, Home voyage and the closing track I’ll find my own way home (the sleeve notes describe it as 'Acid Bach') are based on parts of Bach’s Goldberg Variations (BWV 988) and Well Tempered Clavier 1 (BWV 846-869). Three other classical composers are also plundered. Aprés un Rêve (Op 7 No 1) written in 1877 is adapted from French composer and organist Gabriel-Urbain Fauré (1845-1924) as is Elegy (from Op 20). The song for Akkerman’s daughter Laurie Anne is adapted from Norwegian Edvard Grieg (1843-1907) and Leading me there from W A Mozart (1756-1791). (Jan himself told me how he inadvertently sent the late Rick van der Linden who features on the track, on a wild goose chase looking for the air in the works of Bach instead of Mozart!). Wildflower,  Akkerman’s own composition, also has something of a classical air.
The unplugged guitar album Live at the Priory, issued the following year, has many classical pieces. Wildflower is conjoined with the charming Altogether … Oh that! from Mother Focus. We have mentioned the Dowland piece. Le Clochard is prefaced by the appropriate Classical gas, a hit for Mason Williams back in 1968. Firenze is partnered by the jazz standard Autumn Leaves.
Some of these tracks feature on the 1999 unplugged studio album Passion. In addition there is the Bach derived title track best known through the hymn O sacred head sore wounded; two tracks from Anthony Holborne (Countess of Pembrook’s Paradise and Muy Linda) and the anonymous piece labelled Knight of the Lute. The distinctive final track includes part of the Liebestraum (No 3) by Franz Liszt (1811-1886). Written around 1847 it is his most famous piece. We are not talking about straight classical music, of course. Far from it. I'm thankful for that.