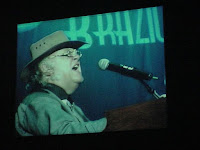 Having observed the eastern element in the music of Jan Akkerman one looks for something similar in Thijs van Leer's music. It is not really there to the same degree. Obviously he performed Moving Waves and collaborated on Black Beauty, Janis, Dayglow, Hocus Pocus, Love Remembered, Harem Scarem, Indian Summer, etc but a careful examination of the matter reveals that whereas both have been open to all sorts of influences (in 1997, for example, van Leer was working with Senegalese musicians) whereas it is the eastern element that stands out with Akkerman, with van Leer, it is the Latin one.
By Latin we do not mean the language used on Round goes the gossip and Hoeratio but the various musical styles emanating from Latin peoples, chiefly from Latin America (including the Caribbean) but not forgetting Latin Europe. It is not that Akkerman ignores the Latin element (he has studied flamenco guitar, played with Paco de Lucia and recorded music by Villa Lobos and Rodrigo) or that van Leer entirely ignores the eastern element (check out China or Miss Saigon for rare examples) we are simply remarking on a tendency in musical choices. Obviously the bulk of van Leer's work is undergirded by German and other Central European traditions but the Latin element is quite strong.
If we look at the earlier Focus period we note that on several albums the Latin element comes through. On the first album it is Sugar Island, on Focus 3 the equally Caribbean Carnival Fugue. Do not forget either the Philip Catherine number Sneezing Bull. When we listed Focus tracks with an eastern influence above, we mentioned Harem Scarem. Interestingly the counterpoint to any eastern feel there is the introduction of a rather Latin French accordion element, clearly coming from van Leer. The French Latin feel can be heard in several places on the unique solo album Renaissance (1986).
On later Focus albums we have the overtly Latin-influenced Le Tango (a Roselie Peters track that originally appeared on the 1975 solo album O my love! and is also on Introspection 4 from 1980, etc) and the more obliquely Latin Ole Judy from 1985 and then, more recently, Rock 'n' Rio, Hurkey Turkey and De ti o de mi (Focus 8) and It takes 2 2 Tango and Brazil Love (Focus 9).The presence of South American aficionado Jan Dumee at one stage undoubtedly encouraged this South American impetus as well as the enthusiastic fan base that Focus have there. (Dumee had spent time in Brazil studying Brazilian music and has worked with many Latin American musicians). In 2002 Focus performed in Argentina, Brazil, Chile, Mexico, Peru and Venezuela. A limited edition Live in South America album was produced that year and other live recordings from that continent and time exist. Later album tracks have been recorded in Sao Paulo.
A trawl through the van Leer archive will reveal other items that perhaps fit this pattern. On Introspection 2 (1976) we find Goyescas No IV by Granados and on Reflections (1986) the Arioso from Leoncavallo's Pagliacci, not forgetting Bahama Mama from Nice to have met you (1978), various issues of Ravel's Bolero, the Ennio Morricone suite (Introspection 92) and Bernstein's Latinesque America (Musical Melody, 1994).
If the above connections appear a little tentative the same cannot be said of van Leer's involvement with Spanish singer Miguel Rios on three Spanish albums in 1981-1983, the use of Luis Luz as percussionist on the van Leer band album (1987), his appearance on the album Nuevo Tango (1997) with Argentinians Astor Piazolla and Luis Borda and his tours of South America with Dutchman Mike Del Ferro. Several of these contacts seem to have arisen from the early eighties period when van Leer worked with Paul Shigihara and two Chilean musicians – Tato Gomez (bass) and Mario Andragona (drums). As well as working on other projects together, these four produced the modern mass Dona Nobis Pacem (1981) as Pedal Point. The lyrics are all in Latin but with a Spanish lilt. On the sleeve notes they thank Carlos Narea for help, singing on one or two tracks and Juan Edo Fernandez “for his spiritual guidance”.
Latin music is a broad category but it is a useful one to have in mind when considering the very varied influences that have shaped the musical output of Thijs van Leer.
PS Since this article was penned three further Focus albums have appeared and each adds to what is found above. Focus X includes Latin influences such as on Crossroads and Birds come fly over, yet another version of Le Tango, this time featuring Brazilian singer Ivan Lins. He also sings on the Spanish or Portuguese track Santa Teresa which appeared as a bonus track on the Japanese version of Focus X and later on The Focus Family Album. Birds come fly over is sung by Thijs himself on this latter album.
In 2016 Focus released an album of material (8.5 Beyond the Horizon) with friends that was recorded with Brazilian musicians in Brazil. Including, as it does, tracks such as Hola, Como Estas and Inalta this album confirms all that has been said of Thijs van Leer being open to Latin influences.  The guest musicians, such as Arthur Maia and Mario Seve, are big players in the worlds of Brazilian jazz and samba, even if their names are not familiar beyond South America.