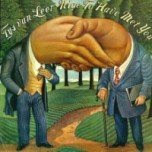 One thing that attracted me to Focus’s music as a teenager in the 1970s was its seriousness. Raised on pop music I was tiring of its superficial predictability. Then along came Focus with something quite different. The irony is that if the novelty piece Hocus Pocus had not become an international hit, I may never have discovered Van Leer (and Akkerman's) music. Somewhat unique in being the only yodelling track to consistently feature on albums that showcase the world’s greatest guitarists, it manages somehow, with its claps, shouts, whistles, yodels and blistering guitar riffs both to amuse and amaze. Perhaps the live version on Focus at the Rainbow is the most fun. (On the 1973 American tour, one night poor old Van Leer sang ‘And on the drums Pierre van der Linden’ only to find Colin Allen there – a reminder that not all humour is intentional!)
On Focus Con Proby the question is asked When does a smile begin? There is certainly a vein of humour, especially in Akkerman's work but also in Van Leer's that surfaces at various points. It is certainly in the Focus output and perhaps the search for novelty did dog them. Singles Harem Scarem and Mother Focus tried to capitalise on Van Leer’s distinctive vocals but nothing is quite as much fun or as satisfying as yodelling! An earlier version of Mother Focus is preserved on Ship of Memories, of course, in the weirder, possibly more satisfying, guise of Glider.
Round goes the gossip (the opener on Focus 3) is a track of subtle humour, weirdly enunciated Latin amid a jazz set overlaid with eventually manic voices repeating the title. Both Carnival Fugue and Elspeth of Nottingham (with its cow mooing at the end) are not without humour either. At the end of the second side of what was originally a double album one can appropriately hear weird and manic laughing in the distance. Eruption (Moving Waves) with its call and answer, piano forte style and monastic choir is another track with witty moments. However, in the musical gag department perhaps Hamburger Concerto (Rare, Medium and Well done!), whose very title is a rather old joke, is the most eccentric. It features Van Leer alternately singing male and female opera parts along with an old Dutch hymn sung in a perfectly composed manner amid classical piano and timpani, electric jazz and rock.
Van Leer's solo output and later Focus work is not marked to any great extent by this same sort of humorous approach though it does surface on rare occasions. For example – Super Fishel and Bahama Mama on Nice to have met you with its rather humorous cover (compare the more risque joke on the best of collection Collage) and perhaps I hate myself (for loving you) on the album of that name and Shock treatment on the same album plus Hurkey Turkey Parts 1 and 2 and the rather weird Flower shower (Focus 8 bonus track) - what on earth is going on there? - and possibly European (Rap)sody. Other fun tracks include Finale (Glorious album), the Rondo pieces and several others. Often when doing scat (as on Etudes sans Genes) Van Leer can be very humorous. The name 147 bars (Etudes sans Genes) is a rare example of a humorous enough title. Van Leer, unlike Akkerman, tends not to go in for such things. An example from Focus days would be using the title Anonymus on the first album or the later Mother Focus (no comment) which also includes the closing track Father Bach.
Writing about humour is seldom funny, but like other elements pinpointed in previous articles, humour is an important element in Van Leer's music to some extent and a further part of what makes his body of work the phenomenon it is.