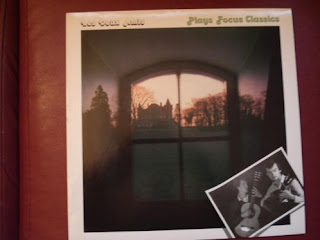 Focus have been relatively free of covers by other artists, partly perhaps because of the demanding nature of their music. Apart from those mentioned in the entries on Hocus Pocus, Sylvia and House of the King there are very few indeed.
Quite early on Toots Thielemans did a version of Love remembered (Focus 3) available on his Silver collection and other compilations. Akkerman himself also later reworked the track with Claus Ogerman. There is a version of Focus 1 by The Lavender Hill Orchestra on an album called Pure relaxation. I believe there was a Danish band that covered much of the Hamburger Concerto material. The band was called Peaches and this is on their 1996 album.
PS (Thanks Kell Nordli - see his comment) In 1985 German guitar duo Les Deux Amis released Les Deux Amis Plays Focus Classics covering 15 Focus songs on classical guitar. Ansgar Krause (b 1965) and Thomas Müller (b 1958) studied under Prof Tadashi Sasaki at Academies in Cologne and Aachen. Teachers themselves, since 1971 they have played together as a duo.
They cover Love remembered- Sylvia- Focus III (inc P's March)- No hang ups- Anonymus (inc Answer, Orfeus, Euridice, House of the king, Tommy)- Soft vanilla- Le Clochard (Bread)- Focus IV (inc Janis)- La Cathedrale de Strasbourg (inc Focus I)- Focus II- Elspeth of Nottingham- Bennie Helder- Brother- Happy nightmare (variations).
A demo CD A little bit of an album from UK band The Trafns (2006) also include covers of Tommy and Le Clochard.
Orion from Focus con Proby was covered by drummer Steve Smith on Vital Information (1984). Smith played drums on Focus con Proby. The song is written by Eef Albers, who also plays guitar on both versions.
In 2018 a band called Texel produced an album ion the Focus style called Zeeming into Focus.

Just a couple of additions:

In 1985 the German guitar duo 'Le Deux Amis" released the album 'Plays Focus Classics' - containing classical guitar interpretations of 15 Focus songs.
Ansgar Krause (born in 1965) and Thomas Müller (born in 1958) both studied classical guitar with Professor Tadashi Sasaki at the Academies of Cologne and Aachen. Since 1971 they have been playing together as the duo LES DEUX AMIS (The two friends).

Jan Akkerman and Thijs van Leer wrote the liner notes:
'When we first heard our two friends playing Focus we were touched by this discovery. No superlatives are good enough to describe their virtuosity, their musicianship and theur arrangements. It sounds so easy but we know what hard labor went into these microphones. We are extremely proud that they have chosen our songs which more than ten years ago were able to move millions of people around the world. This digital recording will get a place of honor at our homes.

The demo CD 'A little bit of an album' from UK band Trafns (2006) also include covers of Tommy and Le Clochard.

I think it is also worth mentioning that the song 'Tommy' was first released as title track on the album 'Divergence' by Dutch jazzrock band Solution. Written by saxophonist Tom Barlage, the song was later renamed to Tommy and more or less became Jan Akkerman's signature song. Tom Barlage later joined Jan Akkerman's band, and plays on his 1978 live album (which actually includes Tommy).

Allthough not written by Akkerman or van Leer, the song 'Orion' from 'Focus con Proby' is covered by drummer Steve Smith on his 1984 album 'Vital Information'.
Smith played drums on 'Focus con Proby'. The song is written by Eef Albers, who also plays guitar on both versions.

Thanks for this too (and for the link). What about the Danish group that did Hamburger COncerto? Any knowledge of that?