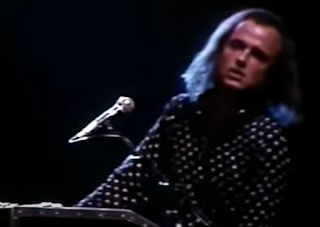 Archive number: 25
Title: Focus 3 (Live)
Main Album: Focus at the Rainbow
Track number: 1
Genre: Live Progressive Rock Instrumental
Venue: Rainbow Theatre, Finsbury Park, 232 Seven Sisters Road, N4 3NX (recorded using Pye Studios Mobile Unit and edited from the two performances)
Length: 03' 55”
Composer: Thijs van Leer
Musicians: Jan Akkerman – Electric guitar (Gibson Les Paul Custom); Thijs van Leer – Hammond organ, Voice; Bert Ruiter - Bass; Pierre van der Linden – Drums
Producer: Mike Vernon
Engineer: Phil Dunne
Label: LP – Polydor, Sire CD – EMI-Bovema, IRS, Red Bullet, JVC Victor
Date of recording/release: May 4, 5 1973/October 1973 (May 4 concert televised UK July 1973) CD 1988, 1993, 2001, 2002, 2004, 2006
Alternative version: The original of this is on Focus 3
Notes: The track itself is preceded by introductory material (00:00-00:36) - the crowd clapping and whistling then cheering the announcement 'Welcome on stage now Focus' and the sounds of the band settling into their positions (the bass drum and sticks are heard). The track itself is a quite faithful but edited version of the much longer studio original, beginning with just organ (00:37-00:54), bass and guitar joining at 00:55 and the brushes on the drums at 01:15, from which point the guitar is 'violined'. One difference is that van Leer's voice can be heard from around 01:22. The 'Petula Clark' part comes in at 02:42. The early quieter part is not repeated as on the original but we come straight to the final sections - the soaring guitar-led part (03:00-03:30) and its reprise (03:31-03:54).
A note on Live Albums (From Wikipedia):
A live album – commonly contrasted with a studio album – is a recording consisting of material (usually music) recorded during stage performances. Live albums may be recorded at a single concert or combine recordings made at multiple concerts. They usually have a less "finished" character than a studio album and are intended to reproduce some of the experience of attending a concert performance. As such, they may include applause and other noise from the audience, comments by the performers between pieces, etc. They often employ multi-track recording direct from the stage sound system (rather than microphones placed among the audience) and can employ additional manipulation and effects during post-production to enhance the quality of the recording. Many successful recording artists release at least one live album at some point during their career. Some live albums are seen as expendable parts of an artists’ catalogue, often failing to sell as well as studio albums though some acts are known for live albums that rival or exceed sales of studio albums.