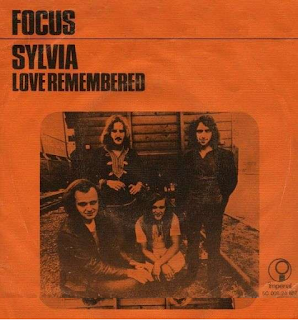 Another great Focus song is Sylvia. Again not to be confused with other songs of the same title. About nine versions of Focus by the band or by Akkerman or van Leer are around. These are
1. The original track on Focus 3 also issued as a single (1973)
2. The live version for TOGWT on Masters from the vaults DVD (1973)
3. The live version on At the Rainbow (1973)
Also
4. An acoustic version by Thijs van Leer and others on Summertime (1996) and Hommage aan Rogier Van Otterloo (1998)
5. Sylvia and Sylvia's grandmother Jan Akkerman 10,000 Clowns on a rainy day (1997)
6. Sylvia's grandmother Jan Akkerman Live at Alexander's (1999)
The reformed Focus can also be heard on at least two live recordings
7. Focus (with Jan Dumee) Live in America (2003)
8. Focus (with Jan Dumee) Live in South America (2004)
There is a version featuring van Leer and Menno Gootjes on
9. Live at Trading boundaries
There have been few covers, although the following mostly obscure bands have produced versions.
10. Project D on synthesizers (1990)
11. Hank Marvin/The Shadows (1992)
12. Dream Circle (1995)
13. Razor (2002)