House of the King Versions 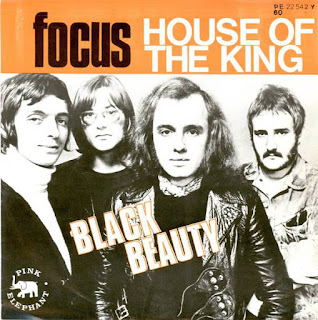 The third great Focus track is House of the King. It too is available in several versions by the band or by Akkerman or van Leer and has been covered once or twice too.
1. The original track on In and Out also issued on the original Focus 3 and as a single (1971) [The track was played live at the Rainbow concert but not issued on CD]
2. Jan Akkerman's version on Tabernakel also issued as a single (1974)
3. The live version featuring Philip Catherine on Live at the BBC (1976)
4. The acoustic version by Thijs van Leer and others on Joy to the World (1996) and Hommage aan Rogier van Otterloo (1998) The reformed Focus can also be heard on at least two live recordings
5. Focus (with Jan Dumee) Live in America (2003)
6. Focus (with Jan Dumee) Live in South America (2004)
Also check out the very eastern version on
7. Jan Akkerman Band Live in Concert (2007)
Covers have been done by some rather obscure bands Cafe Noir, Gruppo Autonomo Suonatori and Flairck.

Labels: Covers, House of the King